Since my last post, I have revisted the folder of photographs taken in Fleetwood Cemetery and think I may have found two female hands clasped on a gravestone. The clothing on the wrist of the hand on the right is slightly worn, but sufficiently 'frilly' to look feminine. I compared it to others in the same cemetery and the only other variation from the jacket sleeve with shirt cuff bearing a cufflink was what seemed to be a knitted [perhaps Fairisle?] pullover sleeve. The latter being a popular item of clothing among males working in the then Fleetwood fishing fleet. 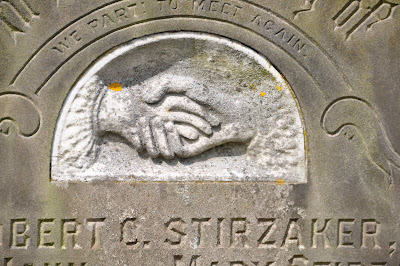 It is quite an interesting gravestone and besides, possibly, hiding some tragic event, it also demonstrates the potential for confusion when first read.

Also the above John Stirzaker
Who died February 5, 1907
Aged 69 years

Once we have worked out that Daniel is the son of John and Mary and not of Robert and Martha as the inscription seems to indicate - the confusion - we are left with the fact that a man, his wife and his brother died within a few months of each other.

I have not looked at Census Returns or Death Certificates, but Margeret Pangert is fond of inviting people to use their imagination to come up with a reason for something. So I'll start:

I immediately thought that illness might have been involved - husband and wife - and maybe the brother killed himself in grief. Then, I thought that, perhaps, the brother had an affair with the wife, the husband killed himself and the errant wife couldn't live with her guilt . . . Maybe, then, the guilt of unintentionally causing the deaths of the other two weighed heavily on his mind . . . ?

That's my thoughts, but my writers' imagination has probably worked overtime. What do you think happened? 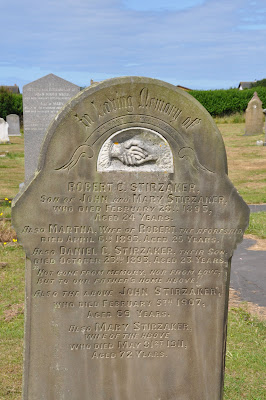 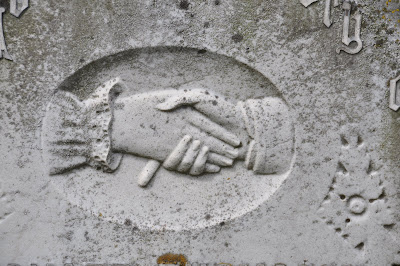 The other day I was thinking about hands on gravestones, sometimes pointing heavenwards or sometimes clasped. The latter can be seen in profusion in Fleetwood Cemetery in Lancashire. As is the norm with the clasped hand symbolism, one hand is female, the other male. Has anyone ever seen two male hands or two female hands on a gravestone?

I was taken with the clasped hands on the stone pictured above this post. On occasion, as with this example, a finger points down to earth. I seem to remember it indicates a continuing connection with life on earth - perhaps with one partner surviving the other? What do others think?
Posted by Laurie at 17:50 7 comments: