A glance at this headstone in Fleetwood Cemetery revealed an exquisite little angel plaque. Sadly, at some stage, the plaque was shattered and the surviving fragments were glued back in place. The headstone commemmorates the death of Ben W Schofield who died on March 17, 1915 aged 47 years. His wife Mary Elizabeth passed away almost fifty years later at the age of 93. 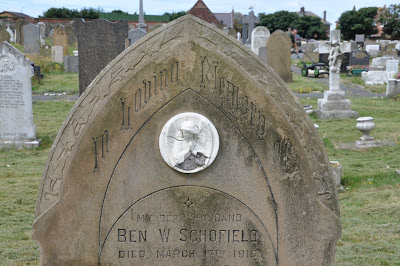 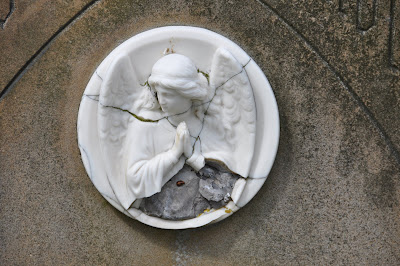 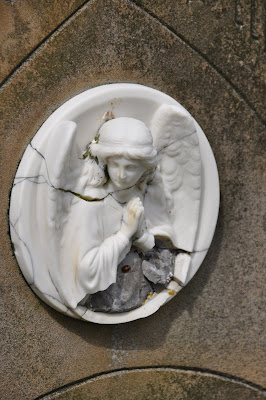 I spotted this headstone in Fleetwood Cemetery. It marks the passing of a Salvation Army musician - Frederick William Atkinson - who passed away on April 23, 1919 aged 20 years. Under the Sally Anne badge, the mason has chisled out a cornet to mark the departed's musicianship.

His headstone is inscribed with the following charming words:

"We cannot say and will not say.
That he is dead. He is just away.
With a cheery smile and a wave of the hand
He has wandered into an unknown land." 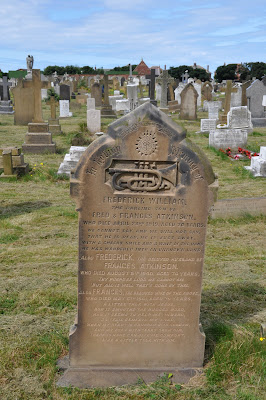 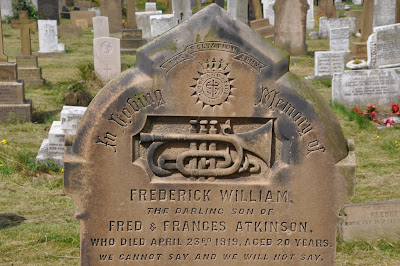 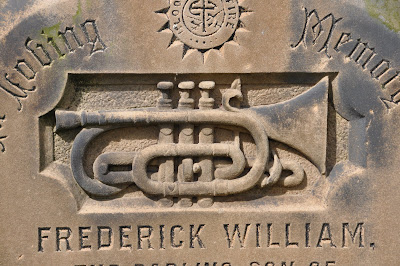 A Boy with a Lamb

About three weeks ago, I visited Blackpool and, while there, I took the opportunity to visit the former fishing port of Fleetwood. The town has a large cemetery which is the oldest and largest cemetery in the Borough of Wyre. It opened in 1841 with the first listed burial taking place in 1845.

The cemetery covers 16.9 acres and contains areas for Church of England, Non-Conformist and Roman Catholic interments, with special areas designated for the interment of cremated remains. More recently, a Baby Section and Garden of Remembrance have been created.

I spent three fascinating hours there and can confirm the cemetery's graves are a rich source of grave art and symbolism. From time to time, I will share some of what I found in the pages of this blog.

One of the most striking memorials is in memory of a five-year-old boy, Ian Donald Murray, who died August 4, 1935. The grave is topped by the seated figure of a child. A lamb is sat beside him and he is cuddling it. It is possible that the figure is based on a likeness of the deceased child, but the representation looks older than a child of five. What minor catastrophe struck the grave, I do not know, but the feet of the figure are missing. 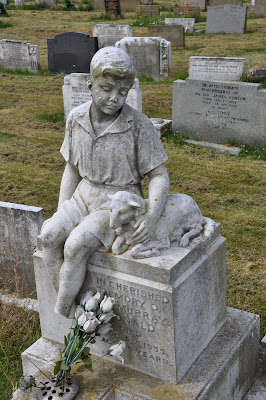 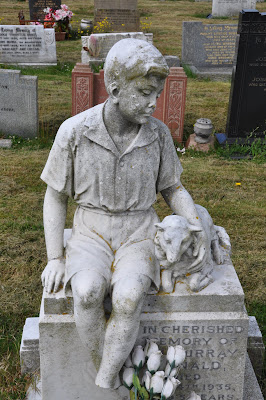 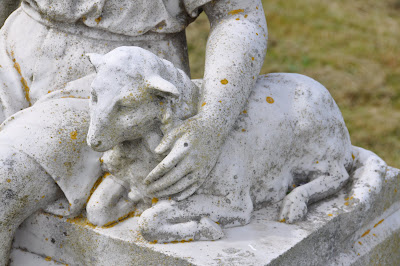 The BBC News magazine has an interesting article on Graveyard Etiquette, following a report of tourists picnicing on burial mounds on the Cullonden battlefield in Scotland. To view the article, click here
Posted by Laurie at 13:16 3 comments: 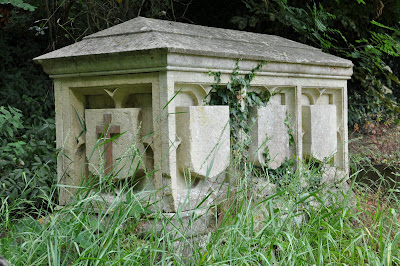 This first photograph from my visit to Abbey Cemetery in Bath shows the tomb of Lieutenant General George Dick with its distinctive red cross. Dick's was the third burial to take place in the cemetery which opened in 1844. He lived with his two daughters in Bath and after his death, his son, George sailed home from India to find he had been cut out of the general's new will, written shortly before his death.

An unsightly spat took place with allegation and counter allegation appearing in the local newspapers. When George accused his sisters of poisoning their father, an exhumation was arranged. Two coroners, solicitors and doctors and a jury attended, as did the general's butler who had the unpleasant task of identifying the body. The tomb was removed and the lead coffin recovered to the cemetery's chapel where a post mortem was carried out. There was much surprise at how little decomposition had occurred in the seventeen months since General Dick was buried.

The next day, an inquest heard that there was inflammation in Dick's digestive tract. Was it caused by arsenic, prussic acid or strychnine? The jury couldn't decide, returning a verdict of death from inflamed stomach and bowels, but with no evidence to show how. The press quickly lost interest, George returned to Calcutta and his sisters retired to Devonshire. The general's body was reinterred and remains undisturbed to this day.
Posted by Laurie at 11:01 8 comments: