Double lifeboat disaster ends in the death of 27 crewmen

Coxswain William Johnson looks out to sea atop the memorial to the 1886 St Annes lifeboat disaster which stands on the seafront at St Annes in Lancashire. 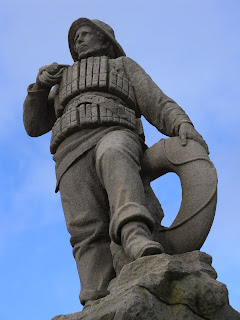 When the Hamburg-registered barque, Mexico went aground in a gale near Southport in Lancashire on December 9, 1886, two lifeboats were lost while making rescue attempts. The Eliza Fernley from Southport capsized with the loss of 13 of her sixteen crew, while the St Annes lifeboat, Laura Janet was launched to assist. At some point, this craft was overturned by waves and all fourteen crew members drowned. It was the largest loss ever incurred by the Royal National Lifeboat Institute. All the crew of the Mexico were later saved by a third lifeboat.
Posted by Laurie at 16:30 6 comments: