Four more images from the photographic scrap box. The first is one that generated my real interest in finding out more about the story behind the names on the stones. You cannot fail to be intrigued when you read the words 'Edith O'Gorman, The Escaped Nun'! The cemetery is also home to Hiram Maxim, the inventor of the dreaded Maxim Gun. 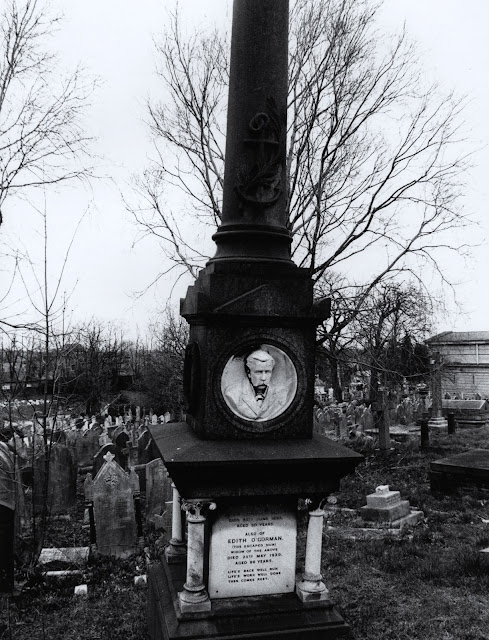 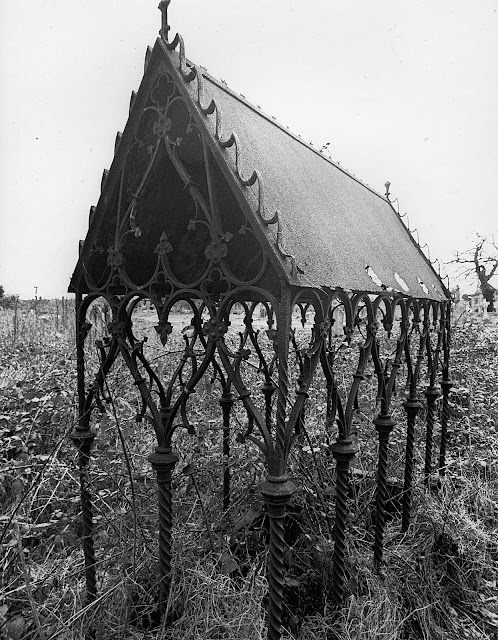 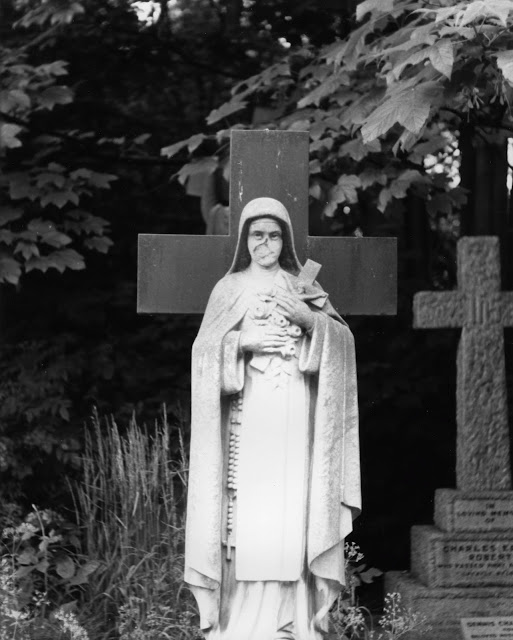 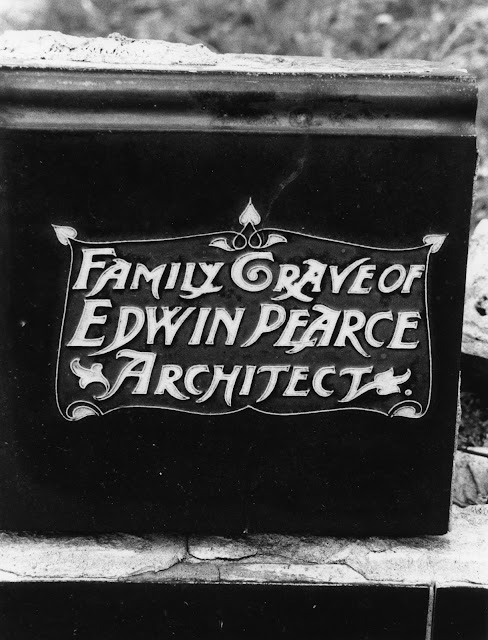 The George Davis memorial is in Wilmington, North Carolina. For more on the memorial, click HERE. 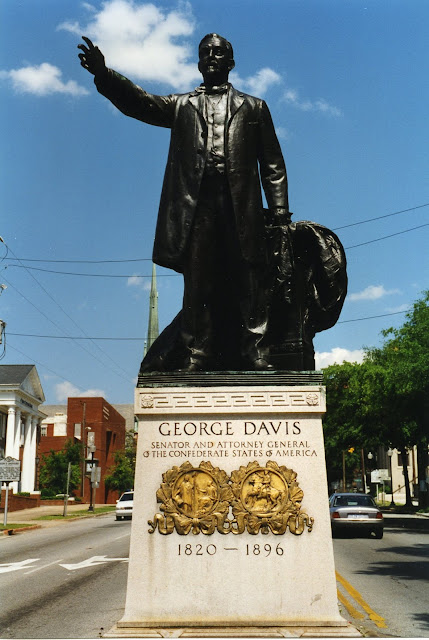 Twenty five years ago, I went for a wander around West Norwood Cemetery in London. I remember thinking what a wonderful place it was. Twenty five years later, I opened a box containing some black and white printing rejects. I post a handful here. I remember printing them in the darkroom and thinking they left a lot to be desired. Now, after the passage of time, I quite like them. West Norwood Cemetery is described HERE. 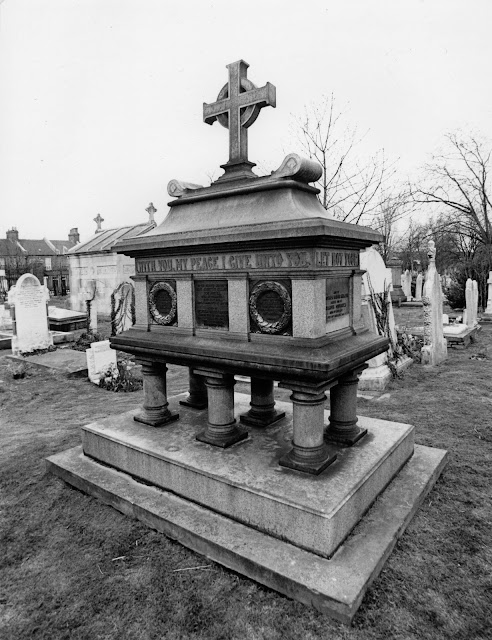 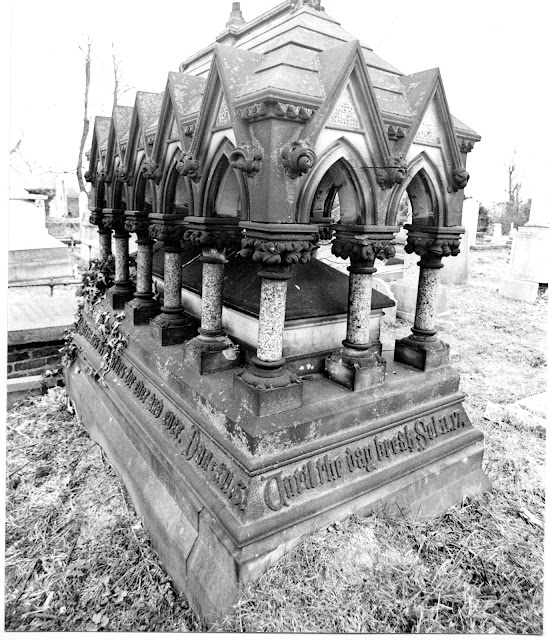 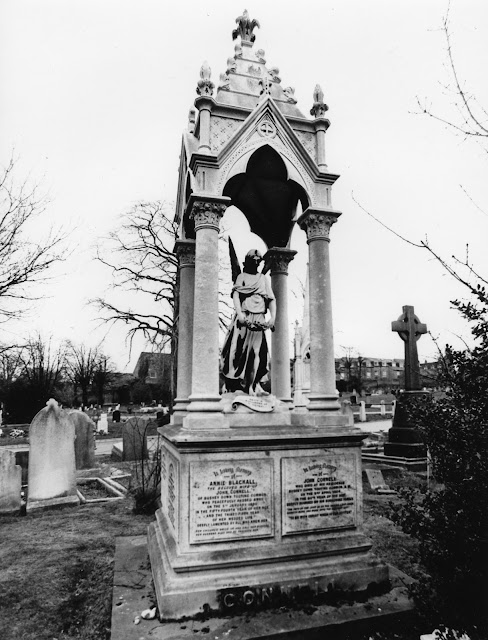 Having found some albums containing around 800 vintage postcards of cemeteries, graveyards, memorials and a lot of First World War cemeteries, I thought I would post this one of Pere-Lechaise. Look at the scale of the wreaths on the impressive memorial to the right. I noticed what I think is two women, one of whom is in mourning dress. Perhaps someone with excellent eyesight can confirm? Click on the image to make it larger. 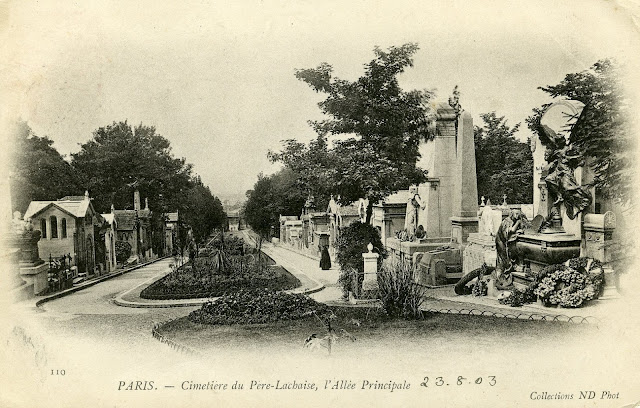 Early Meanderings of the Graveyard Detective

Last weekend, I found an old photographic paper box and on opening it, found a considerable number of images of myself. A small number of them showed me on my travels recording graves. As I have some time on my hands for once, I will reproduce a handful here.

I started visiting cemeteries and graveyards more years ago than I care to remember. That said, right from the start I found myself interested in not only the names and inscriptions, but also in the funerary architecture on display. Most of my early shots were exposed on 35mm black and white film and then I started carrying a second camera loaded with colour slides. Thank heavens for digital as I now only need to carry one camera (or my trusty iPhone4).

In the 1980s, I got a job on a fortnightly magazine and travelled a bit - well, a lot. Just about everywhere I went I took the opportunity to visit cemeteries. It was great and I found some really interesting memorials. I also got to meet and interview some really interesting people but that's another story. People often ask me how I chose the title of this blog. Simple, really. Years ago, I arrived at a cemetery looking for interesting stories and saw a friend already there. On seeing me, he turned to his companion and said: "Look, it's the graveyard detective!" The name stuck!

One piece of advice I give people is to shoot as many photographs as you can. When I used film, I used to say - Film is cheap, don't hold back! Now, in the digital age, with a large capacity memory card you can take hundreds of photos cheaply. And remember to get closes-ups. I remember going to one of the early Kensal Green cemetery open days and kneeling in front of a gravestone to record some detail. I heard a guided tour group approaching behind me and, to my great pleasure, heard the guide say: "Look at that young man taking a close-up. What do I keep telling you? Get closer!" I was especially pleased to hear that as the guide was my great heroine - the wonderful architectural photographer, Lucinda Lambton.

Stones that Tell a Story 2

A further glimpse of historic graves in Gibraltar's Trafalgar Cemetery 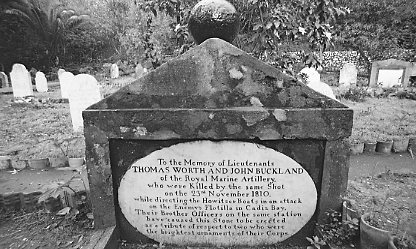 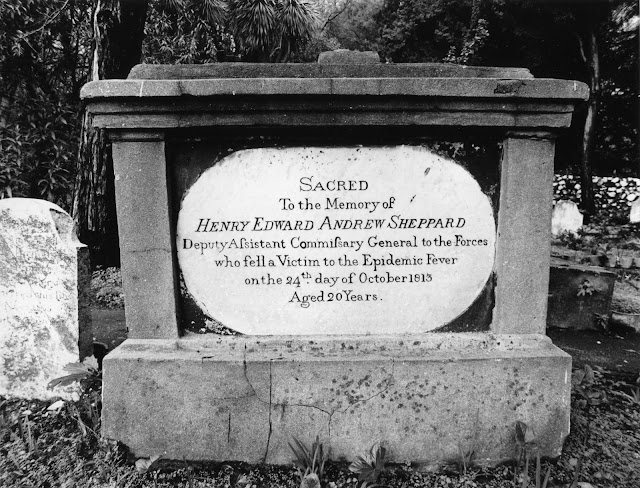 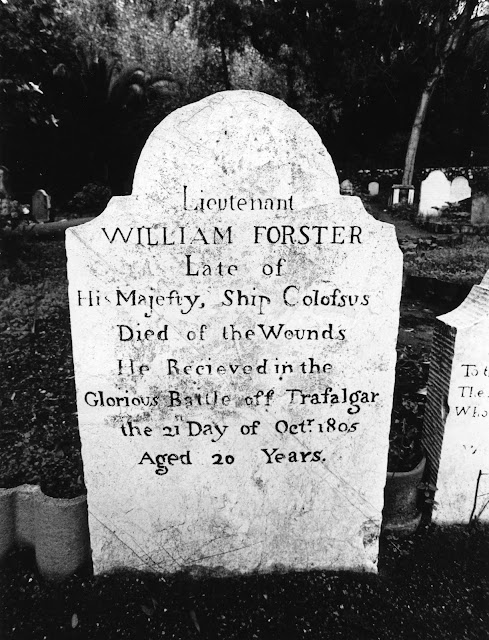 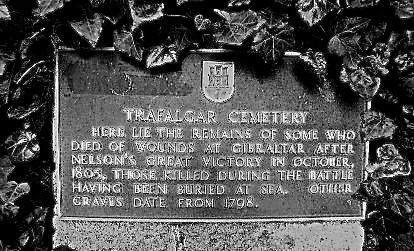 Here is the RAF Memorial Stone on Hamel Down, Dartmoor that I photographed in 1985. It proved a bit of an uphill hike but well worth the visit. It must have been taken in the hot Summer - hence the shorts!

A Hampden bomber from 49 Squadron RAF crashed into the hillside on the night of March 21, 1941. The four man crew were killed. The stone bears an incised cross under which has been inscribed: 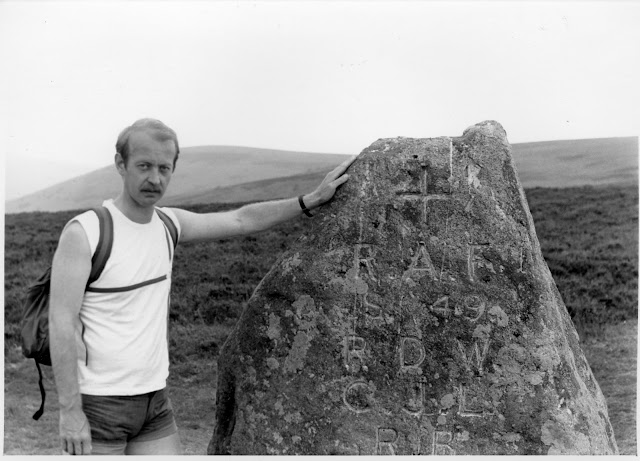 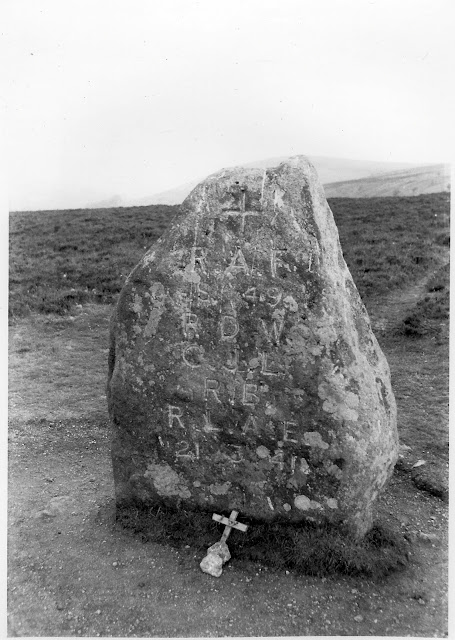 The crew members were Pilot Officer The Honourable Robert Wilson, Sgt Robert Brames (Wireless Operator/Air Gunner), Sgt Richard Ellis (2nd Pilot) and Sgt Charles Lyon (Air Gunner). Evident the pilot survived until the next day - it is thought because he was found still strapped in his seat. A really useful website provides much information about the memorial HERE - scroll down to the links for the crew names. These lead to photographs of the graves.

Curiously, not far away, I saw the remnants of anti-invasion measure from the Second World War. Pine poles were erected all over Hamel Down early in the war to obstruct a glider-borne invasion. Here is a photograph taken by Mike White (Creative Commons) which shows one of the poles still standing. I remember being intrigued at the way the knots protruded as the outer layers of wood were eroded by the elements.

Here is an early example of an undertaker's business card. I like the term 'Funeral Furnisher'. T Rhys and Sons records for the company's building work and coal merchant business are held in the West Glamorgan archive - sadly, no undertaking records. 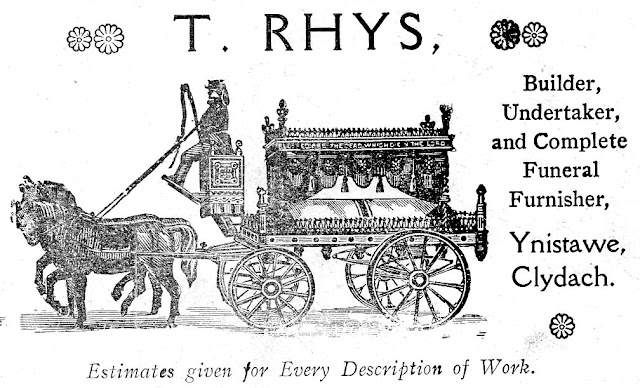 Stones That Tell A Story

I just love headstones that tell a story and I certainly found several during an assignment in Gibraltar. I visited the Trafalgar Cemetery which was used for burials between 1798 and 1814. Despite its name, only two of those buried within died of wounds received during the battle. A sign records that those killed at Trafalgar were buried at sea.

Originally known as the Southport Ditch Cemetery, most of the those buried died in three Yellow Fever epidemics in 1804, 1813 and 1814. Among others buried in the cemetery are those  who died of wounds from other Napoleonic War sea battles - the Battle of Algeciras (1801) and the actions at Cadiz (1810) and Malaga (1812).

Two websites give more information about the cemetery and can be found HERE and HERE. 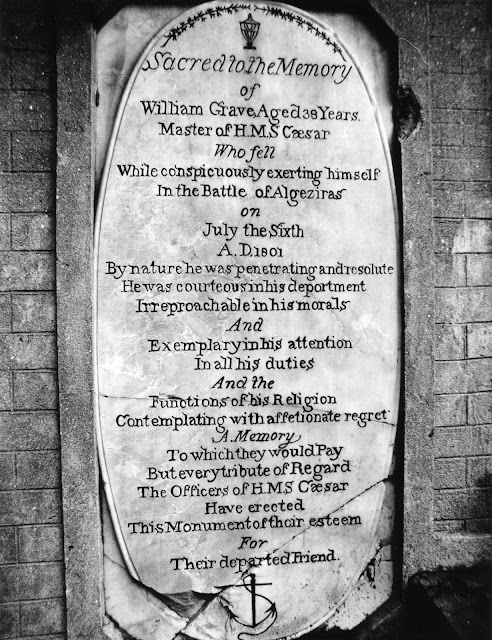 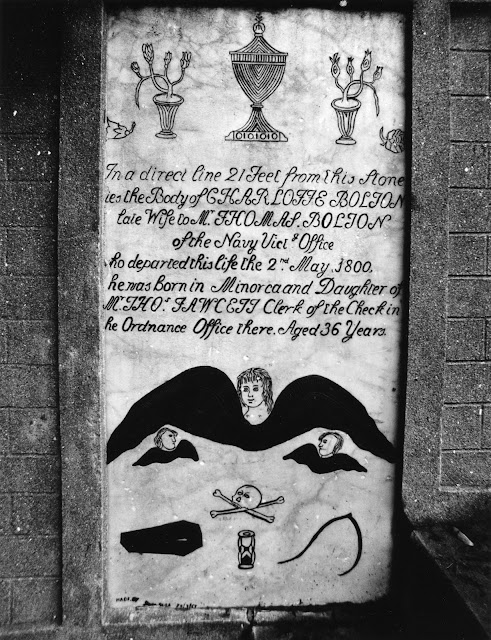 The very striking grade II-listed bronze relief plaque commemorating the Victorian building magnate at West Norwood cemetery. Click HERE for further images of the grave. The plaque was damaged in 2011 when thieves tried to pry it off so they could sell it for scrap. I remember being struck by how lifelike the image was.

I was looking through some recently rediscovered items from my collection and found a black-edged envelope upon which someone had pencilled 'Mother's'. It was sealed. I carefully opened it and found an in memoriam card. I have some unusual such cards in my collection, but this was different. It marked the death of William and Emily Bottomley who both died the same day in 1924 and buried together in Pontefract, Yorkshire. In the 1901 Census, He is described as a Coal Pit Deputy (below). He died of bronchitis and she of influenza and bronchitis. A photograph of their grave can be found HERE if you are a member of Ancestry. 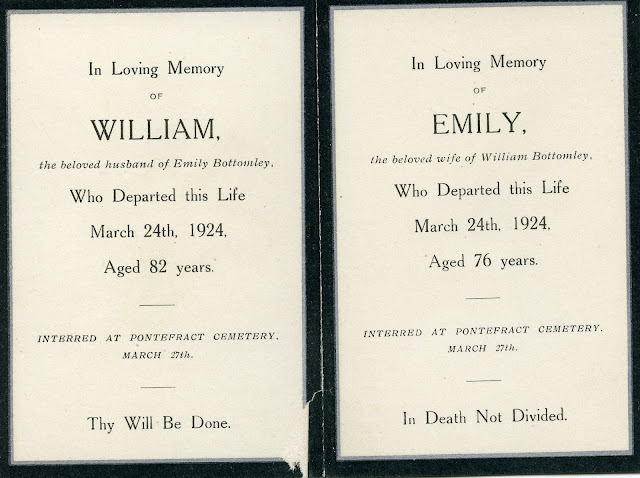 A Covering of What?

I am rather baffled by this grave in the graveyard of St Leonard the Less in Salmesbury, Lancashire. It marks the last resting place of the Reverend William Scholes who died September 7, 1913. He arrived at the Vicarage in 1881. It looks as if it had once been buried or, perhaps, coated with Ivy. The residue covers most the the stone but has been scraped away in places. I am left wondering what caused it. 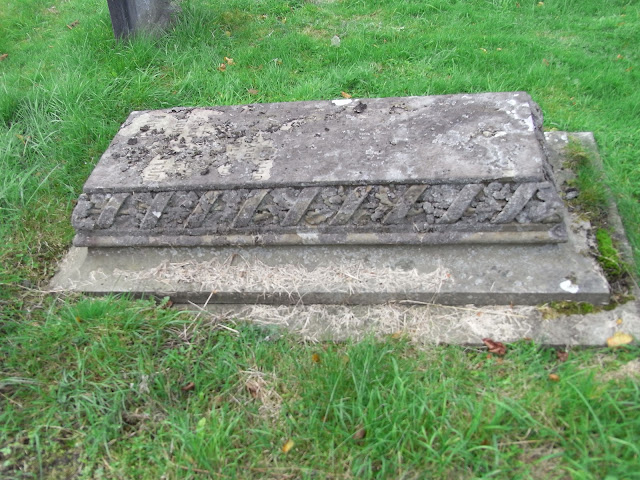 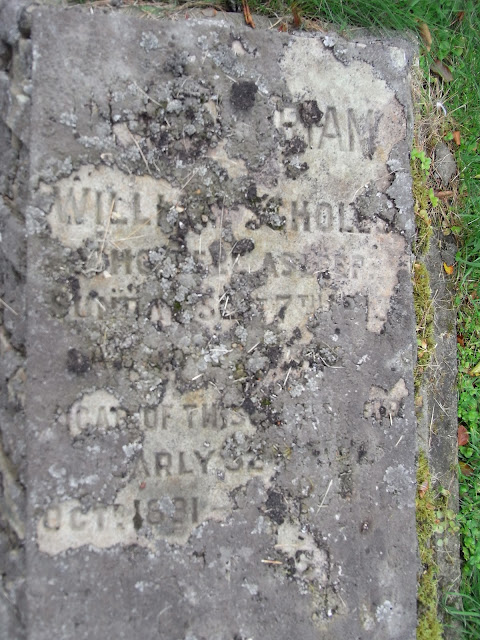 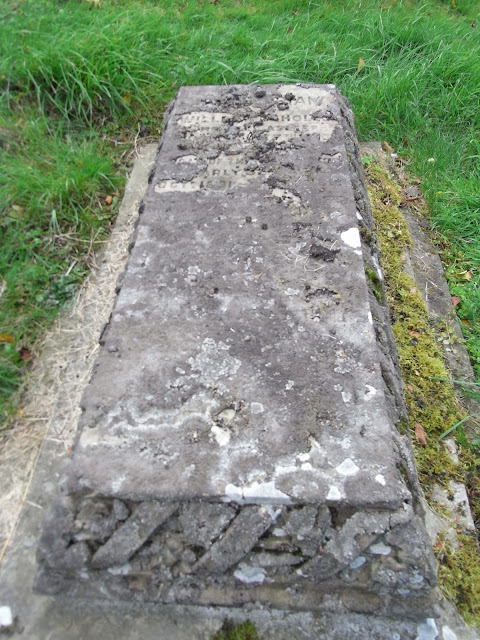 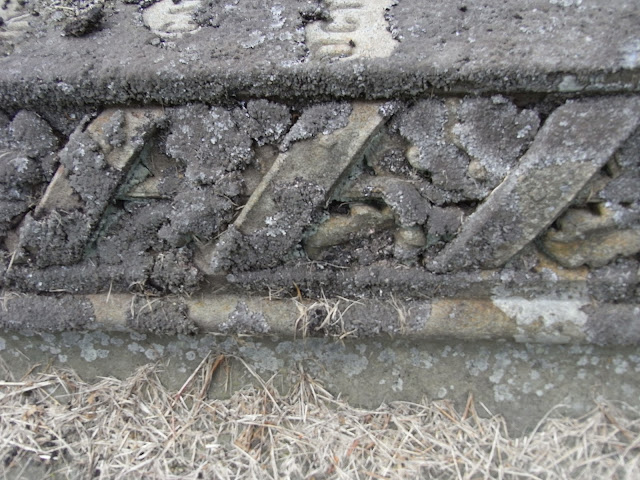