Flowering Sunday in Wales - known in Church circles as Palm Sunday and as Blossom Sunday in England - saw the custom of decorating graves with flowers. An account of the 1888 event in Newport recorded that the display at the New Cemetery was not as great as in former years:

"Neither was the attendance of visitors so numerous, doubtless being attributable to the unfavourable state of the weather. Some had taken the precaution to have the flowers there on Saturday night, and of course in consequence of the subsequent snowfall, they were entirely obscured from view by the 'white mantle' on Sunday morning.

Due to the rowdyism usually prevailing in the Cemetery on Flowering Sunday, there was yesterday, a strong force of police on duty there, and of course the presence of this largely had the effect of preserving order, decorum and better conduct that has unfortunately hitherto been the rule."

The two postcards reproduced below are postmarked Cardiff [April 1907] and addressed to Mrs S Jones of Crosby near Liverpool. Thanks to the writer, they can be identified as having been taken on Flowering Sunday.

This is the grave that I had the photo of to give you an Idea how the graves are done on Flowering Sunday. All natural flowers.

This is another one belonging to Mrs Studxx [illegible] who own the pound about in S. Wales. The flowers in this must cost a lot of money every year, for it is done up beautiful. 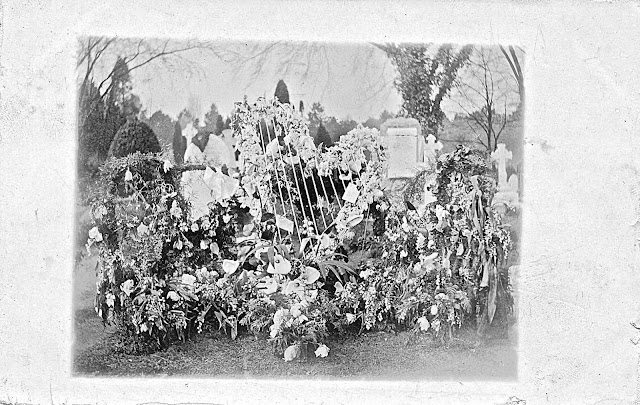 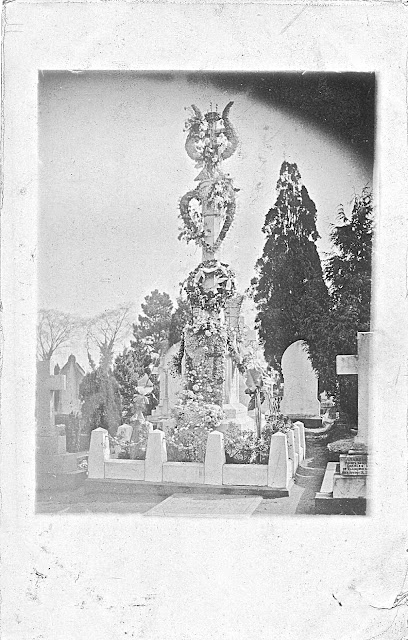 This vintage postcard shows some of the spectacular floral tributes on display at the funeral of the Great Lafayette in Edinburgh in 1911.

Sigmund Neuberger was born in 1871 at Munich, Germany. He was otherwise known as the famous illusionist The Great Lafayette. Wikipedia records that he was the highest paid magician of his time. He excelled through his quick-change routines and his dramatic illusions such as his own 'Lion's Bride' (lady to lion) illusion made him very popular with audiences.

The pampered object of his affection was his dog Beauty which had been given to him as a pup by Harry Houdini. Beauty had her own suite of roos, ate five course meals and wore a diamond-studded collar. She died four days before a show opened at the Empire Palace Theatre in Edinburgh. Lafayetted arranged for the dog to be buried in Piershill Cemetery - the council agreeing to provide a plot on the condition that Lafayette himself would be buried their upon his own death. A poignant post mortem photograph of Beauty can be found HERE

Remarkably, Lafayette died in a freak accident. The full horror of incident is well recorded on Wikipedia, thus:


Lafayette was performing his signature illusion "The Lion's Bride", when a fault in a lamp above the performer caused a fire. The elaborate set went up in flames within minutes. The audience, thinking that this was all part of the illusion, did not evacuate until the theatre manager signalled for the orchestra to playGod Save the King. Many of the company, however, were trapped on stage when the safety curtain was lowered and jammed, leaving only a small gap at the bottom, through which a strong draught of air fanned the flames into an inferno. Lafayette himself had ensured that the side-doors to the stage had been secured, to exclude unwanted interlopers and prevent the lion's escape.
Lafayette escaped but returned in a vain attempt to rescue his horse. He became trapped in the burning building and perished. Ten of his fellow players from the company were also killed in the fire. The theatre burned to the ground. The body of Lafayette was apparently soon found and sent to Glasgow for cremation. Two days after the fire, however, workers clearing the understage area found another body identically dressed as Lafayette. It transpired that the body at the crematorium was that of the illusionist's body double. On 14 May the urn containing the Great Lafayette's ashes was taken through Edinburgh, witnessed by a crowd estimated to number over 250,000, before being laid to rest in the paws of his beloved (and now stuffed) Beauty, at Piershill Cemetery.
Contemporary footage of the Funeral in Edinburgh can be seen HERE 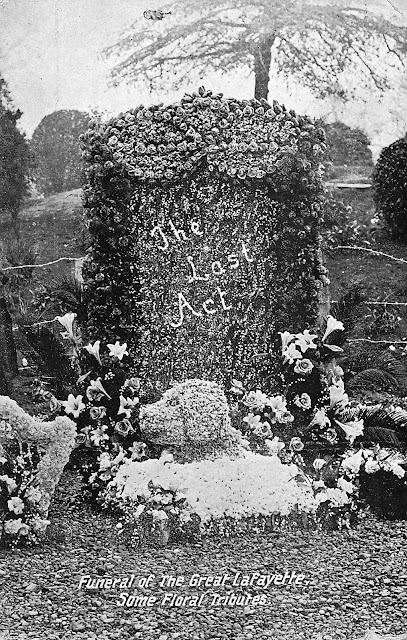 I saw this photograph on Pinterest and thought the close proximity of the stones was rather striking. It is the Old Jewish Cemetery in Prague. Is is estimated that, because space was at a premium, the graves are layer some 12 deep, resulting in the lopsided gravestones.

Old Jewish Cemetary in Prague -Created in the 15th century when Jews were forbidden to bury their dead outside their own district. Space was scarce, so bodies were buried on top of each other. Historians estimate that the graves are layered about 12 deep, resulting in lopsided tombstones. Author Franz Kafka enjoyed moments of quiet reflection here; However, his own grave lies in the New Jewish Cemetery, which is half empty as the generation it was built for became victims of Nazi death camps.
Posted by Laurie at 16:57 No comments:

Here are three postcards showing the work of stone masons in Dysart, Fife. A pencilled note on the reverse suggested the first two cards are of the Davidson Foggo Yard in Station Road. The third, numbered 25 is stamped with the name of the firm, W McKay & Son. 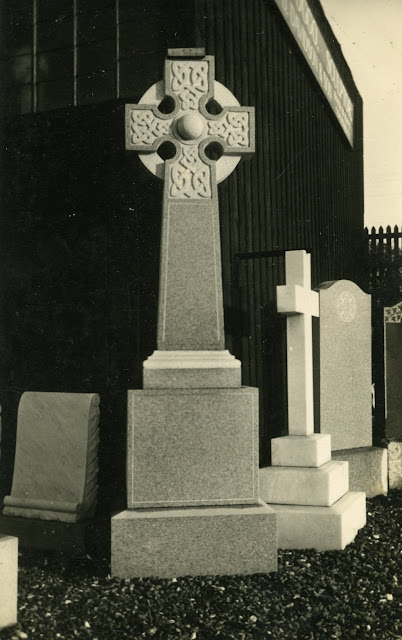 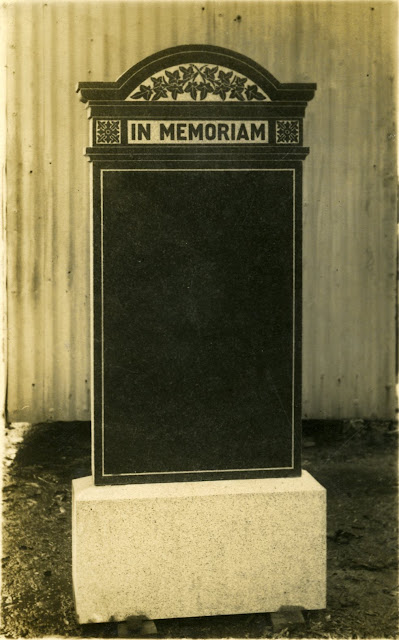 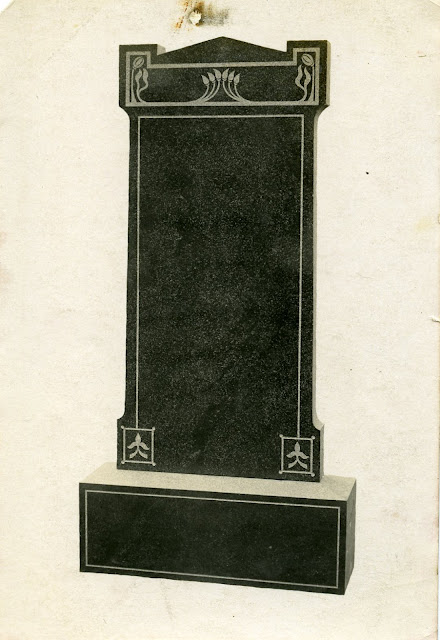 I saw this on the back of a headstone and thought I should take a closer look. Doctor Temperley was a Bolton-born scientist who was known all over the world for his work in desalination - the removal of salt from seawater. I found an obituary HERE. 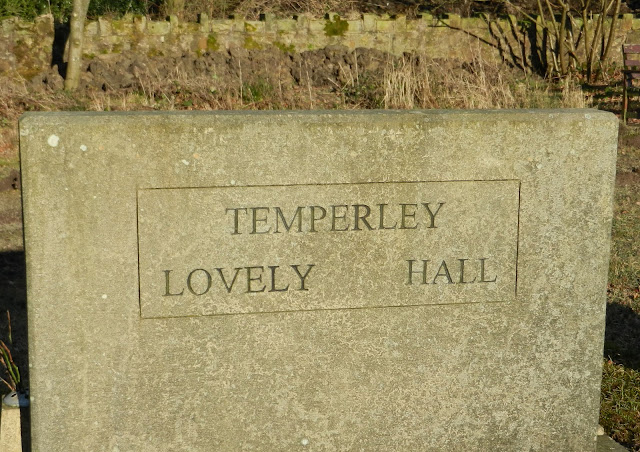 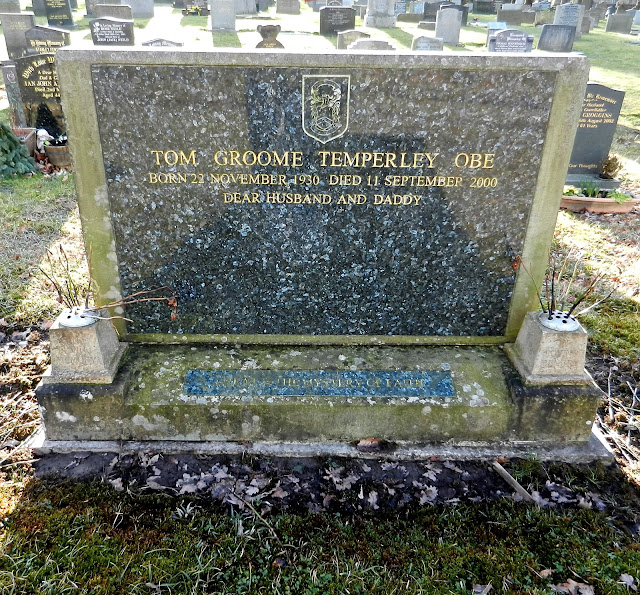 This is the second Roman Catholic war memorial I have found in Lancashire. It is in the churchyard of St Wilfred's church in Longridge. In strong sunlight, it is spectacularly white. The detail is very fine. Note the hobnails on the soles of the soldier's boots. The fourth image shows the names of those who died in the Second World War which were added much later. 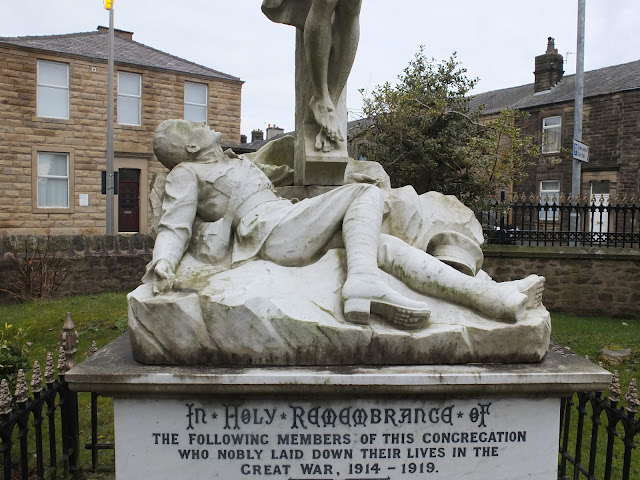 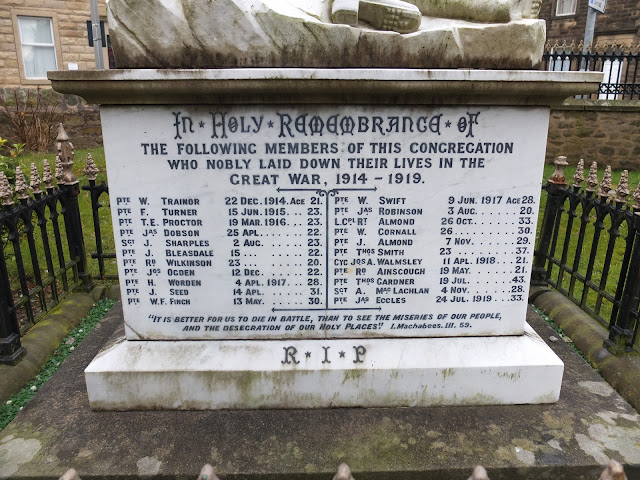 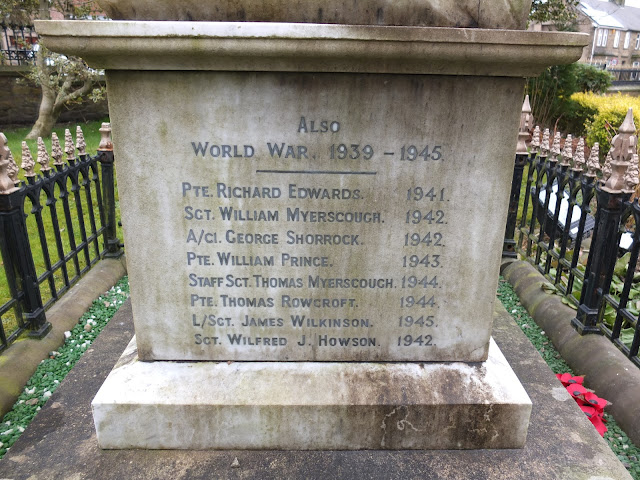