Creating Pictures in my Mind: Strange Day in a Lancashire Cemetery

Creating Pictures in my Mind: Strange Day in a Lancashire Cemetery: "Over the past few years, I have taken some 25,000 digital images - many of them in cemeteries. What has been remarkable is that of all those..."
Posted by Laurie at 20:08 No comments:

The Impact of Hurricane Katrina!

This stunning photograph shows the impact the devasting hurricane had on this cemetery in Biloxi.

The photographer, Rob Valquez (Spirit of Light Photography), shot this photo This photo at the Biloxi MS cemetery. It was the final resting place of a German immigrant who was interred there in 1868. When Katrina wrecked havoc on the Mississippi coast, even the dead weren't spared of her wrath. Apparently, Katrina disinterred a bunch of bodies/caskets and deposited them on the beach (according to Biloxi resident who was there to see it). The shore is right across the street from the cemetery. Bodies had to be identified and reinterred which is why some of the tombs in the cemetary look new even though the dates on them go way back.
Said Rob: "While driving through the cemetary, this particular tomb stopped me right in my tracks. Two things came to mind when I took the photo; 1. Katrina was ruthless and spared no one or nothing that stood in her way and 2. sadness that this poor guy's tomb wasn't rebuilt like the rest that were. If I had the money, I'd probably have it rebuilt on my dime, A person's final resting place should never look like that." Click on the photograph to be taken to Rob's Flickr photostream.
Posted by Laurie at 15:58 5 comments:

In the churchyard at Woodplumpton, this large stone sits above the remains of one Meg Shelton. She was alleged to be a witch and responsible for all sorts of strange goings on. Hers was said to be an unquiet grave and she was seen a number of times after burial in 1705. She was, so the story goes, then buried face down and the heavy stone placed on top to prevent her escaping! 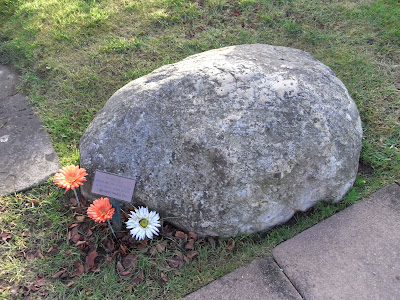 Another figure at the graveside. In this case, it is likely to be the widower of Emma Knight. The freshly erected headstone records: 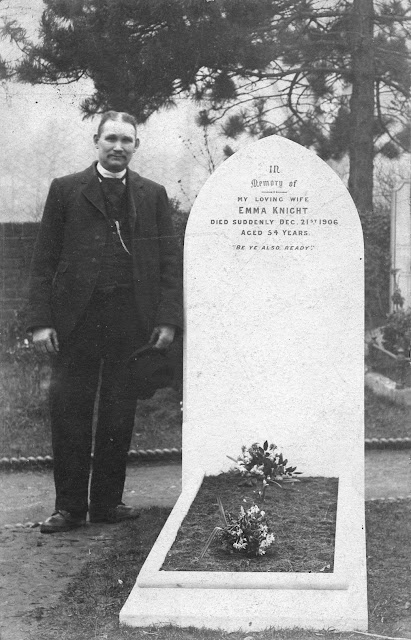 If you could afford it, there were some imposing floral tributes available. On this Lancashire grave, two glass covered tributes have been place - the larger being particularly impressive. The headstone records the grave as being the last resting place of John Henry Law, the husband of Alice Ann Law of 12 Melrose Terrace, Weir Lane, Bacup.  He died on March 29, 1913 aged 39. The 1901 Census records him as a Calico Print machinist and his father as a Cotton Loom Overlooker. 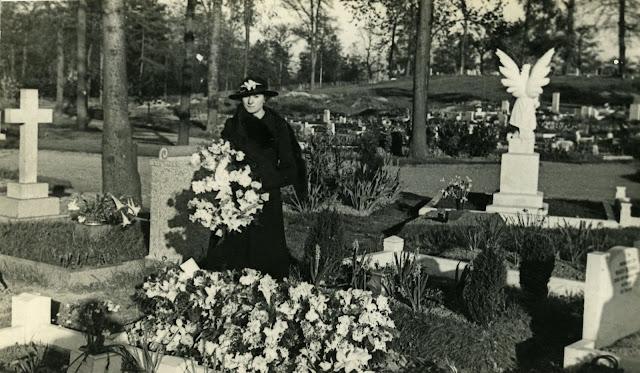 Happy New Year!
Posted by Laurie at 00:01 No comments: