According to the American Battle Monuments Commission, the 4.5 acre Brookwood American Cemetery and Memorial in England lies to the west of the large civilian cemetery built by the London Necropolis Co. and contains the graves of 468 US war dead of the First World War. Close by are military cemeteries and monuments of the British Commonwealth and other allied nations. Automobiles may drive through the Commonwealth or civilian cemeteries to the American cemetery. It is the only American Military of the Great War in Britain.


The two postcards below show the view to the visitor reception centre with its central archway and the view from the archway out to the war graves. They both mention 437 dead so other casualties must have been buried later in the postwar period. I have visited the cemetery twice and it is very impressive. 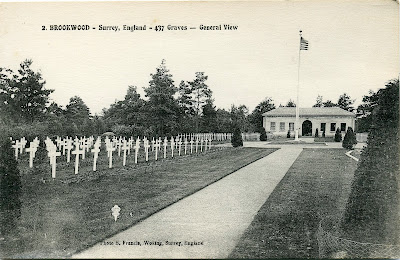 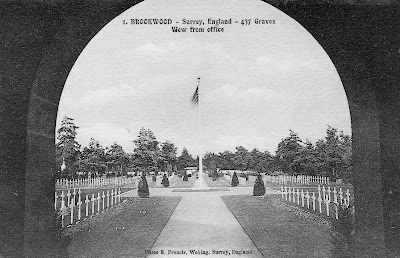 Certainly impressive and well worth looking round.
http://graveplace.blogspot.co.uk/2012/10/the-american-cemetery-brookwood.html